A great number of significant representatives from political and corporate Greek bodies were present at the opening ceremony of the 6th FOOD EXPO, emphasizing the importance of the trade show’s role for the entirety of the Food & Beverage sector in Southeast Europe.

Mr Nikos Choudalakis, President & CEO of Forum SA, the exhibition organizing company, inaugurated FOOD EXPO 2019 by saying that “FOOD EXPO is one of the most significant exhibitions in Greece, since it concerns to one of the most dynamic and extroverted sectors of the Greek economy, which is, also, one of the key pillars for the development of the country.” At the same time, he noted that FOOD EXPO’s international visibility together with the universal acceptance it enjoys by the entirety of the Greek market, reflects the dynamics of the industry’s productive sector as well as the tremendous prospects of Greek Food & Beverage exports worldwide.

Finally, he wished both exhibitors and visitors, that the business meetings that will take place during the trade show will grow to be important future business opportunities bringing significant benefits to all interested parties.

Following Mr Choudalakis, the Minister of Agricultural Development & Food, Mr Stavros Arachovitis, addressed the audience, and, after taking stock of the work of the Greek government added that “we are going through a period during which Greek exports have reached their peak, recording record numbers. This is no coincidence. In fact, it is the result of methodical and effective initiatives at inter-ministerial level with the cooperation of the business community. From now on, all we have to do is ensure the continuous upward export trend and preserve the reputation of Greek products.” At the end of his speech, he wished everyone success, while talking about the significance of the FOOD EXPO trade show, he said “I am positive that this year’s FOOD EXPO will be even more successful in terms of both export and commercial interest and will once again be the most efficient export platform for our agricultural products.”

Ms Alia Abbas, General Director of Economy and Trade at the Ministry of Economy of the Lebanese Republic, also addressed the trade show opening ceremony by saying that “our willingness to strengthen the economic ties with Greece through building up on b2b meetings, shows that we believe FOOD EXPO 2019 is a first class opportunity for customers and buyers to be exposed to a large selection of Lebanese products. We urge you to heck our 10 Lebanese companies inside the Lebanese Pavilion to surf the taste of the authentic traditional Lebanese cuisine and its Mediterranean nature.”

Left: Mrs. Alia Abbas, Director General of the Ministry of Economy and Trade of the Republic of Lebanon, Right: Thanasis Gialouris, Vice-President of FORUM SA

Mr Thanassis Bouras, Secretary General of New Democracy Parliamentary Group, addressed the audience, stating that “FOOD EXPO, is the largest Food and Beverage Trade Show, in Southeastern Europe and a significant meeting point for the international food and beverage market”. According to Mr Bouras the trade fair promotes Greece and the Greek companies, contributing to the increase of their exports.”

The importance of Food & Beverage exports to the Greek economy stressed Mr Giorgos Konstantopoulos, President of the Greek Exporters Association (SEVE), who said that “FOOD EXPO has managed, within a short period of time and thanks mostly to the dynamic presence of Greek exporting companies, to consolidate its reputation in Southeast Europe and bring our customers to Greece, by inviting them to experience from up close the Greek culinary adventures and break new ground in their respective businesses.”

Mr. Alexandros Vasilikos, President of the Hellenic Chamber of Hotels and Mr. Konstantinos Michalos, President of the Athens Chamber of Commerce and Industry, also addressed the audience. Mr. Vassilikos, highlighted the importance of gastronomy in the Tourism industry of Greece added: “I am very proud that the Hellenic Chamber of Hotels participates in FOOD EXPO 2019. I firmly believe that the Greek hotels should promote our local products, as they are considered to be a very important promotion tool of the Greek cuisine”.

Finally, Mr. Michalos noted that “FOOD EXPO is an important meeting point for the domestic F&B production industry, as well as for 900 international buyers and more than 5,500 visitors from all over the world”, while pointed out that “gastronomy is the added value of the Greek Tourism Industry and in general of the Greek economy”.

Finally, it is worth mentioning that many ambassadors in Greece also attended the ceremony. Amongst them, the ones of Japan, Qatar, India, Vietnam, Lithuania, France, Egypt, Bulgaria, Estonia, Indonesia, Jordan, Kenya, Moldova, Morocco, The Netherlands, Pakistan, Seychelles and Lebanon.

At the end of the addresses, everyone went to the exhibition entrance to observe the ribbon cutting ceremony. 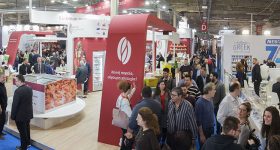 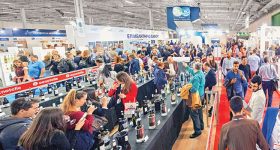 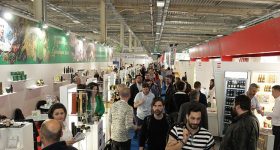